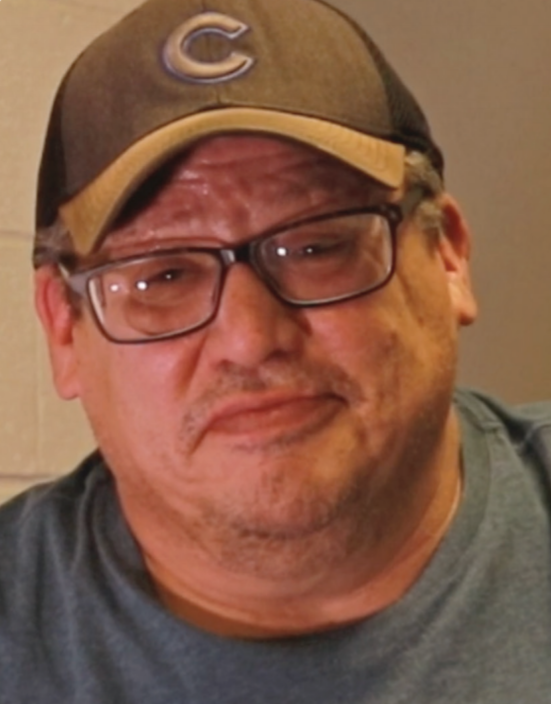 Bear was once a college football player and a hard worker, but physical injury, childhood trauma, shame, and alcohol use led to him spending a fateful night on the streets.

Bear is a large man with an even larger personality and heart. He was homeless for decades before he came to PPiH and has become somewhat of a staple in the community. Bear is known for his love of sports and is an avid Vikings fan. Bear is a knowledge seeker with a passion for reading. Bear loves facts and has an uncanny way of remembering them and sharing them with others.

He is also a gifted storyteller. His words are simply mesmerizing and he is so charismatic, you could listen to him talk all day. Bear has overcome incredible odds to find safety, stability, and a place to call home. For decades, Bear traveled across Fargo-Moorhead on foot. His drinking was his biggest nemesis.

"And one day, they woke me up in detox, and this person was saying she wanted to help me, and she was from Presentation Partners," Bear says.

When we found Bear in detox, he was suffering from frostbite, a harsh result of falling asleep outside on a cold winter night. Bear's drinking could have led to his death that night; his drinking often led to negative consequences such as trips to jail for trespassing or public intoxication.

When people in our community seem lost because of their struggle with chronic homelessness and other agencies have been unsuccessful in finding shelter and stability for them, they are often referred to PPiH. We have learned to walk with them on their journey back to stability.

PPiH has established relationships with property owners to get people like Bear who have past criminal records into housing. In Bear's 53 years of life he had never signed his name on a lease agreement.

With PPiH's support Bear has been in his apartment for two years with no infractions. The act of finding housing, housing stability planning, advocacy, teaching, connections to lasting resources, and active listening by PPiH staff have made all the difference to Bear.

"Oh, yeah, I mean, they gave me a lot of ... just a lot of guidance, a lot of support." Bear feels fortunate to have received the help he so desperately needed.

Shortly after moving into housing, Bear found out that he had cancer.

Those are words no one wants to hear, especially if you are homeless and without support. Fortunately, PPiH was there to walk with Bear through his cancer treatment journey as well as knee surgery and recovery. We continue to meet with Bear to ensure his housing is stable and to encourage him.

Bear shares, "In fact, she usually texts me a couple of times a week just to touch base and see how I'm doing and stuff like that." That support means so much to Bear and has helped build his confidence.